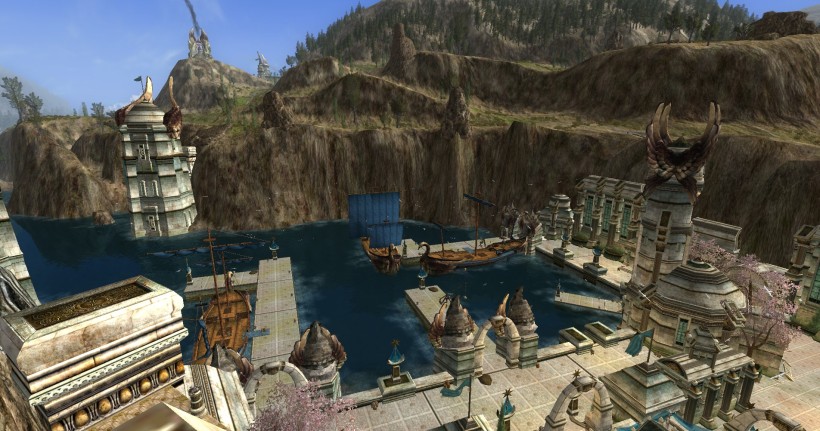 She could not help but grin. The boards beneath her feet were sturdy and polished. No sign of the scuffle remained. No drop of the scurvy traitor’s blood marred the smooth pine of the deck. The crew that defended him were imprisoned with him in a damp Gondorian cell and replaced (only with some difficulty). For now, the cargo hold was filled will crates of jarred fish the merchant needed shipping and she would serve.

But ultimately, nothing mattered more than the feel of the briny wind on her cheeks and the snap of the sail. The wheel felt comfortable in her hand and she was home again sailing along the coast beneath the golden sun.

“Well, it was not very thoughtful. You didn’t think, did you?”

“He insisted on accompanying me. He has lived in Bree all his life; I would have thought he knew what it was like.”

“Little whelp, most people do not go out cavorting with corpses and talking to spirits. The Bree-landers I’ve encountered are bloody terrified of the place.”

“Well, he does not want me to go anymore.”

“…Really, now? I don’t blame him. Surely he just wishes for you to remain in a much safer place than those ghastly tombs.”

“Well, that is what he said. He just cannot imagine what he would do if something happened to me.”

“That is an appropriate response to the place, I think. You are going to listen to him, aren’t you? Stay out of the Barrows? Anya?”

“Hmph. Well, that is a start. You need to keep looking forward, Anya. There is a lot of life to live. I think the grave-digger would want you to always remember that.”

She told him that she would stay at the house, but she couldn’t stay while he packed the things that he would take to his parents’ manor. She had fled out the window; she probably should have just taken the stairs, but she did not want to feel the dark emptiness of the streets at this time of night. She did not want to feel the emptiness inside of her festering as if each man that came to her took something of her with him when he left her lying there alone.

She wasn’t sure she’d go back to the house even when Pengail had left. He had bought it with his family’s money for their future together. Now what was left there but a cold hearth and a shrinking puddle from the rain.

Rooftops were never really empty. The heat of the living rose to warm the tiles and stone. Her footing was certain and light as she made her way to her cliff overlooking the docks. There she would go to think and dream and fall in love with Dol Amroth all over again.

She loved her city despite everything it asked of her, but how could she reconcile this? It turned on her, twisted her, and now he only saw her as a whore.

She broke her vow to the order when she married him because of what he gave her: love. A place to belong and a family.

She broke her vow to him because of what the order gave her: power. Power to stand up against the corruption and the darkness that spread through the city with every dawn.

And in the end, she was left alone in the shadowy night in a place where Hathlafel or Hallem would find her if she never moved again. But her husband probably never would.

If he ever looked for her again.

It would happen when she was alone and the silence became too heavy for her to bear. Her legs would start to tremble and her ankles weakened with her knees and finally she’d fall to her hands and knees and the tears would burn her eyes and cheeks as they spilled. Her forehead would press against the cold stones that made up the floor, or the prickly grass, or the marshy land where it met the sloshing water of the Little Staddlemere and her sobs would wrack her body with such force, she ached for hours afterward.

Oh, how she missed him. And she hated herself for missing him so much that it hurt. It hurt deep in her chest, so deep that she did not even think it was her heart that ached. Her very core poured itself into her tears and she knew that she would never really get over Morducai Mossfoot. No matter what she said, or who she loved next, she would always cry when the silence reminded her how she was the first one he ever left behind by choice.

Eventually she would fall silent herself, and the sounds that had been drowned out in her pain would return. Birds singing. The wind tickling the leaves. She would pick herself up and smooth out her robes and splash water on her face and go about whatever it was that had been interrupted.

She began to fear the silence, so she started spending more time in Bree. That meant smiling when she felt like screaming and small talk when she felt each flippant statement about the weather mocked her very existence.

The voices became louder each day. More insistent. She mustn’t believe them, she argued back. She was loved. Things change. They only knew lies.

Even when she was with Oleander Hawthorn, they whispered their lies. He, too, would leave her one day. He, too, would tire of her clumsiness and lack of clever things to say. He only loved being in love; he did not love her.

The voices were getting louder.